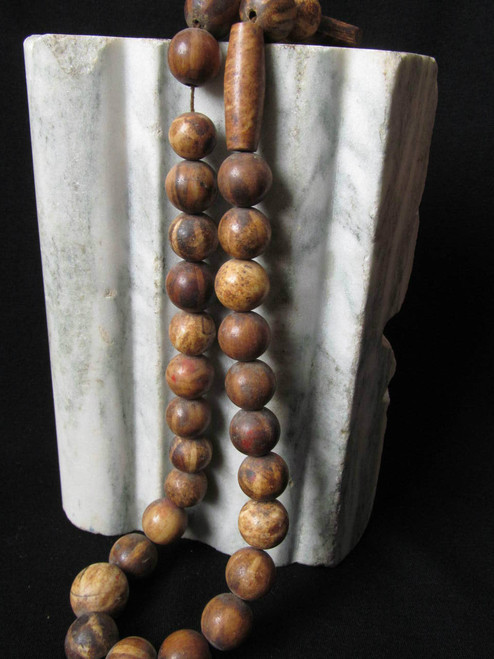 These are not original Pyu beads, but Chin 'copies'made around 500 years ago. The original Pumtek beads from the Pyu city states
have been made continuously for the last 1000 years in the Chin area.

Pumtek beads, also called buried thunderbolt beads are important heirloom beads
among the Chin who live in the Chin Hills of western Burma/Myanmar
and the adjacent area of eastern India, where they are called Kuki.The original Pumtek beads were made over 1000 years ago by the Pyu, the builders
of the first city states in Burma, but somehow the Pumtek bead art survived in the
mountains, far from the fertile rice plains of Bagan in its heydays.

Ancient Pumtek beads are often small, often made of the opalized
wood of the palm Borassus flabellifer. This type of beads will fluoresce under a short-wave UV lamp.

Instead of opalized palm wood many Pumtek beads are made of other forms ofpetrified wood -
often in the form chalcedony. Still they can be ancient. Petrified wood originating from all kinds of
wood can be found all over Burma. It is only natural that ancient bead makers (as well as
contemporary ones) have chosen this beautiful material to create beads out of.