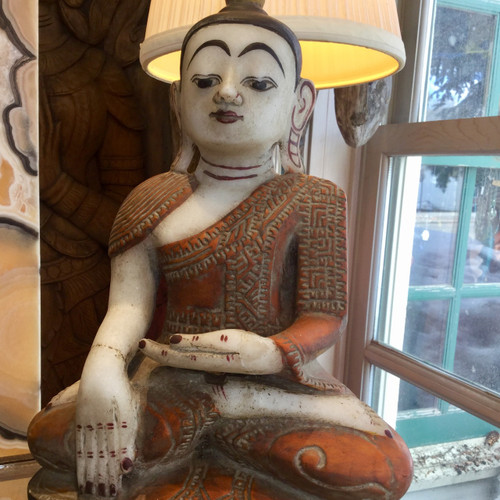 Burmese alabaster buddha sitting in Mara Vijaya (calling the earth to witness) posture on a base with Burmese inscription, meditative facial expression, emphasized by the half-closed eyes which look downward.

Top of the head is a stupa-shaped "flame" or called usnisa, symbol of the realization of Nirvana or indicative of supreme knowledge.

The Shan State in Myanmar (formerly Burma) is the biggest state in Myanmar and consists of a variety of ethnic groups which have developed their own unique style of Buddhist imagery, some Shan Buddha statues are in the Jambhupati style, an adaptation of the Arakan style Buddha image dressed in royal attire from Rackhine state in Myanmar.