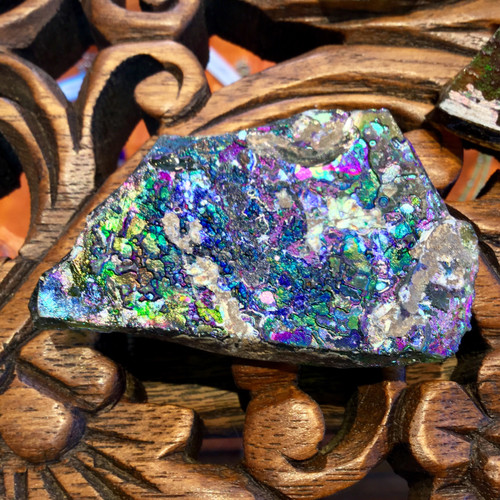 Almost complete opalescent flash both side of this fragment.   Great for a wire wrap.

Over 2000 years ago, Romans created glass by a manufacturing process involving iron which seeped into the glass itself. The bits of glass that were lost and buried for centuries were transformed via oxidation into a new glass-mineral called Roman glass. The most rare and valuable Roman glass sparkles with a variety of colors that are extra vivid. The vast Roman Empire covered the Middle East and Mesopotamia, where is now, among other modern countries, located Afghanistan, where this piece was found.

Roman glass objects have been recovered across the Roman Empire in domestic, industrial and funerary contexts. Glass was used primarily for the production of vessels, although mosaic tiles and window glass were also produced. Roman glass production developed from Hellenistic technical traditions, initially concentrating on the production of intensely coloured cast glass vessels. However, during the 1st century AD the industry underwent rapid technical growth that saw the introduction of glass blowing and the dominance of colourless or 'aqua' glasses. Production of raw glass was undertaken in geographically separate locations to the working of glass into finished vessels,[1][2] and by the end of the 1st century AD large scale manufacturing resulted in the establishment of glass as a commonly available material in the Roman world, and one which also had technically very difficult specialized types of luxury glass, which must have been very expensive.