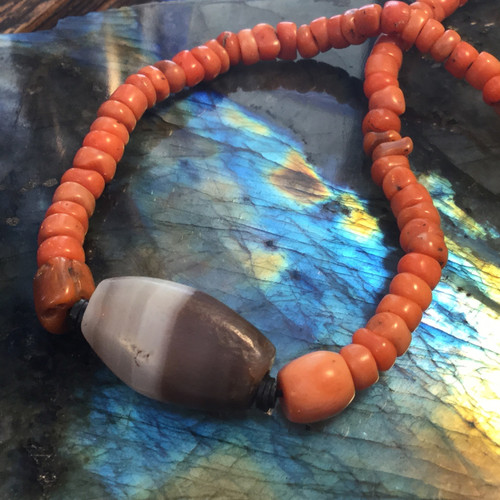 Dzi stones made their first appearance between 2000 and 1000 BC, in ancient India: a few hundred thousand were supposedly brought back by Tibetan soldiers from Persia or ancient Tajikistan during a raid. The malicious effect of the “evil eye” was taken very seriously by these people. Dzi were considered to counteract the evil eye. The artisans who made the dzi created amulets with “eyes” on them as a “fight fire with fire” form of protection. Artisans used agate as the base stone, and then embellished the beads lines and shapes using ancient methods that remain mysterious. Treatments may have included darkening with plant sugars and heat, bleaching and white line etching with natron, and protecting certain areas with grease, clay, wax or a similar substance. A hole was drilled before the bead was decorated as drilling caused most breakage during the production process, and holes were also useful for stringing and dipping numerous beads as a step in coloration. The earliest holes were conical and done with solid drill bits drilling from both ends and, hopefully, meeting near the center of the bead. Very small drill tips of chipped flint were used without abrasives and numerous other materials, regardless of hardness, when used with abrasives. Neolithic era beads were also drilled with hollow, tubular abrasion driven bits of reed and, later, during the Chalcolithic, copper. These drilled a hole with a core of agate inside the tubular drill. Tubular bit holes were parallel walled rather than conical, but also done from both ends. Both methods required arduous work done with a bow drill, with time and effort being determined by hardness of abrasive, from ground sand (quartz) to corundum.

Tibetan Medicine Bead with Indus Valley Carnilian circa, 400 BC-400 AD