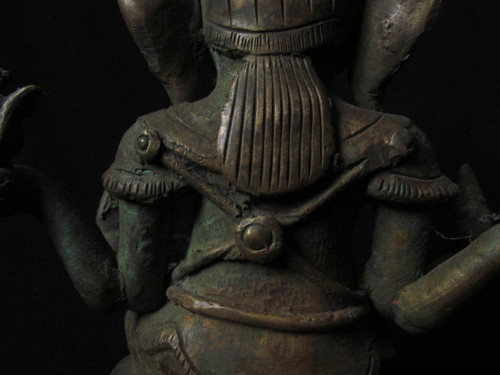 It's a country where Ganesh was very popular during the Indian Gupta period, especially in South Burma. Ganesh was and is still known and worshipped as Maha-Peinne (the Great Bliss. He was considered as "The Lord who removes obstacles". One quotes Ganesh statues in Pagan :

Quite a lot of Ganesh representations have ben found in south Burma. Known as able to raise obstacles and difficulties, Ganesh images used to be carried, during their travels, by merchants who left India in search of good fortune. Locally the Ganesh images were also worshipped, mainly by traders and businessmen. Images found in the country appear, most times, rather rough.

Ganesh name in Burma is Mahâ-Binna; this name is still in use nowadays. Another name is Mahapeine (Full Joy). His worship started long time before the first known inscriptions, which date only from the 13th century (1270). After the Ava period, the Ganesh cult was introduced to the royal court and the deity was also worshipped during marriage ceremonies.

In the Rangoon (Yangon) Museum, two Ganesh represented are noticed. All of them ar small in size and carved in bas-relief. One of them shows the six-armed god seated in padmasana. Emblems hold by hands cannot be identified. The upper left hand seems to hold a chakra (discus) and a noose while the lower hands hold a fruit bilva (wood-apple, Aegle Marmelos).